Among the holdings pertaining to the concertinist (and violist) Richard Blagrove (1826 – 1895) at the Museum of the Royal Academy of Music, there is an autograph letter dated 28 September 1863 from Blagrove to an unnamed female recipient. Housed in the Museum’s McCann Collection under the acquisition number 2004.1482, the letter (apparently the only known letter in Blagrove’s hand) provides insight into a number of aspects concerning Blagrove’s activities as a concertinist.

Figure 1 reproduces the letter in its entirety. 1 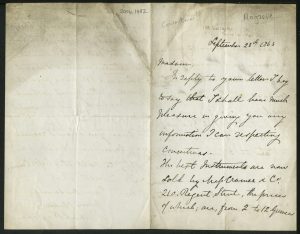 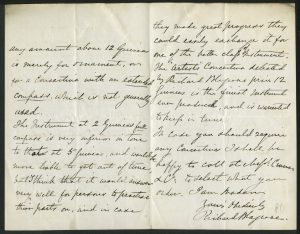 Though Blagrove’s orthography presents no difficulties, I offer a transcription in which the added superscript letters serve as “cues” to the topics discussed below.

In reply to your letter I beg / to say that I shall have much / pleasure in giving you any / information I can respecting / concertinas.

The best instruments are now / sold by Messrs Cramer & Co.b / 210. Regent Street,c the prices / of which, are, from 2 to 12 Guineas / [page 2] any amount above 12 Guineas / is merely for ornament,d or / for a Concertina with an extended / compass, which is not generally / used.e

The Instrument at 2 Guineas full / compass is very inferior in tone / to that at 5 Guineas, and would be / more liable to get out of tune, / but I think that it would answer / very well for persons to practise / their parts on, and in case / [page 3] they made great progress they / could easily exchange it for / one of the better class of Instruments. / The Artists Concertina selected / by Richard Blagrovef price 12 / Guineas is the finest Instrument / ever produced, and is warrented [sic] / to keep in tune.

In case you should require / any Concertinas I shall be / happy to call at Messrs Cramer / & Co. to select what you / order.g I am Madam

What follows takes up the seven passages cued above.

To conclude: our letter is important for a number of reasons: (1) it appears to be the only known letter written in Blagrove’s hand; (2) it shows that the Blagrove – Cramer & Co. – Artist’s Concertina connection was already in place by 1863 at the latest; (3) it sheds some light on the drastic decline in the number of Blagrove entries in the Wheatstone ledgers beginning in 1859; and (4) it confirms my earlier suggestion that the leading concertina teachers of the day were happy — or should we say obliged — to run around town in order to pick up instruments for their students (both current and prospective). As such, it adds to our knowledge of the mid-Victorian concertina world, both in general and as it pertains to Richard Blagrove in particular.

Appendix A: Blagrove in the Wheatstone Ledgers

What follows lists all 179 references to Richard Blagrove in the Wheatstone ledgers. With respect to the overlapping entries in C1046 (organized chronologically) and C104a (organized by serial number): when, as they sometimes do, they differ either partially or entirely, I provide both entries. Throughout the ledgers there are three types of entries that pertain to Blagrove without mentioning his name. Two of these are clear cut: a notated reference to Blagrove is followed either by “D[itt]o” or “Mr — —” (at no point have I reproduced the ledgers’ use of superscripts); I have passed over these silently. The third type is more problematical and perhaps even open to question: on six occasions an entry for Blagrove is followed by a blank space where a name should appear; I have counted these as referring to Blagrove, and I have noted their appearance in the Comments column. The ledgers’ utilize a number of abbreviations in recording their transactions, three of which appear in entries concerning Blagrove: “Ex” = “Exchanged”; “ret” = “returned”; and “SH” = “Second Hand.” Finally, although the ledgers begin to provide prices for the instruments as of 1 January 1851 (ledger C1047), I have not included them.

Appendix B: Cramer & Co. in the Wheatstone Ledgers

Appendix B lists the fifty-one entries for Cramer & Co. in the Wheatstone ledgers. Though the company was known under various names depending upon the changing partnerships (see Table 1, above), the ledgers consistently use “Cramer & Co” or variants thereof (again, I have not reproduced the ledgers’ superscripts, and thus what some might judge to be the typographically awkward “Messrs.” As noted in Appendix A, the ledgers begin to include prices as of 1 January 1851 (in C1047); here I include them. If, as sometimes happens, a transaction fails to include either a serial number or, after 1 January 1851, a price, I indicate that with – – – -. Finally, when a price applies to more than one instrument, I note that in the Comments, enter the price in the space for the first instrument to which it applies, and leave the “price column” blank in the subsequent entries.