Although Richard Blagrove’s contribution to the English concertina’s nineteenth-century repertory was enormous, only one of his compositions is entirely original—that is, not based on pre-existent material of one type or another (usually well-known opera excerpts or folk/“national” songs). 1 Titled Morceaux, this single original work consists of four miniatures (total duration approximately ten minutes), and was published by Wheatstone & Co. in 1850 with a dedication to Lady Belhaven of Wishaw House. 2 And it is with a text-critical problem in No. 3 of the set that we will be concerned.

Example 1 gives No. 3 in its entirety (after the original print). 3 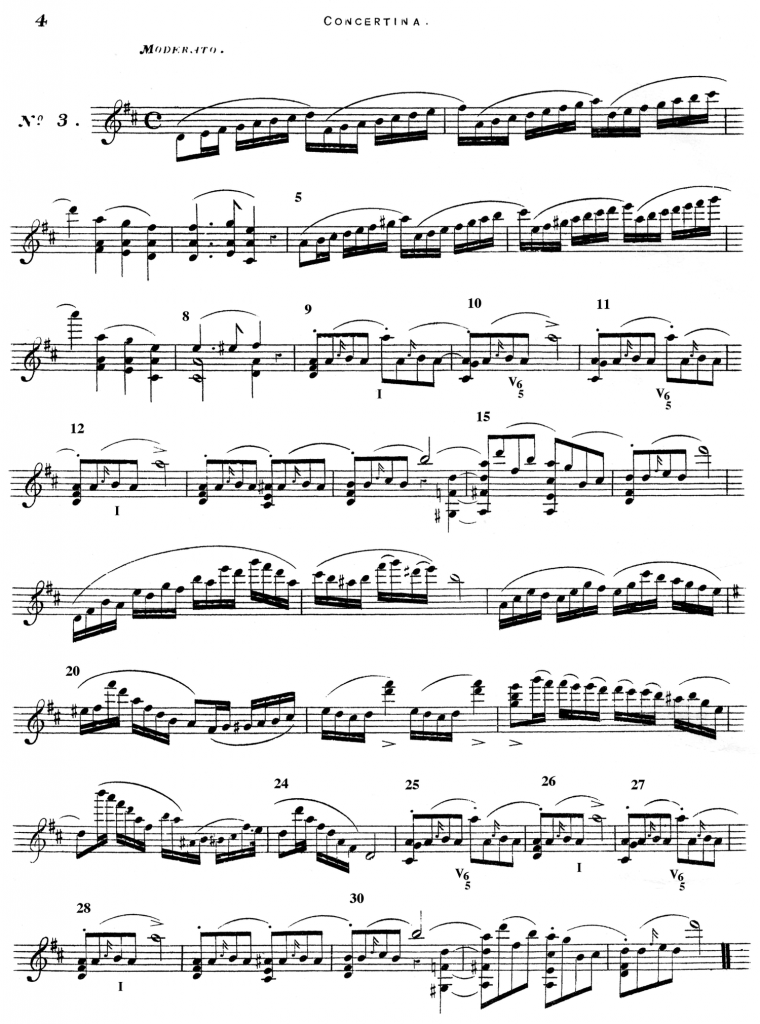 To better understand the problem, a brief word about the structure of the piece is in order. Cast in a rounded-binary form, it consists of two main sections, each with two eight-measure periods, the last of which, b’, recalls the b period with which the first half concluded. The sections break down as follows:

The text-critical problem occurs in connection with the relationship between b and b’, more specifically with that between measures 9 – 12 in b and their recollection at measures 25 – 28 in b’.

As it happens, each of the four pieces offers instances of thematic recollection. Examples 2, 3, and 4 provide the passages in question as they appear in Nos. 1, 2, and 4, respectively. Like that in No. 3, the recollection in No. 1 is short, as measures 5 – 8 = 22 – 25 (Ex. 2):The problem is this: whereas measures 9 – 12 roll out in a balanced and pleasingly symmetrical harmonic progression of (to state things simply) I – V – V – I (in other words, tonic – dominant – dominant – tonic), 4 their analogue at measures 25 – 28 offers (simply again) V – I – V – I, with the effect of the immediate and literal repetition of V – I being nothing less than deadening. Indeed, people for whom I’ve played the piece (as written) have said that the progression sounds like a mistake (“you’ve played the same thing twice”)! But if it is a mistake, who made it: Blagrove (composers do miscalculate) or the engraver? Unfortunately, I am not aware of the existence of either a Blagrove autograph or a fair copy (in any hand) from which the engraver might have worked (autograph and fair copy could have been one and the same), so to search for an answer along that avenue is a dead end. What we can do, however, is look at the three other pieces that make up the Morceaux, and see if there are analogous situations that may shed light on the question. 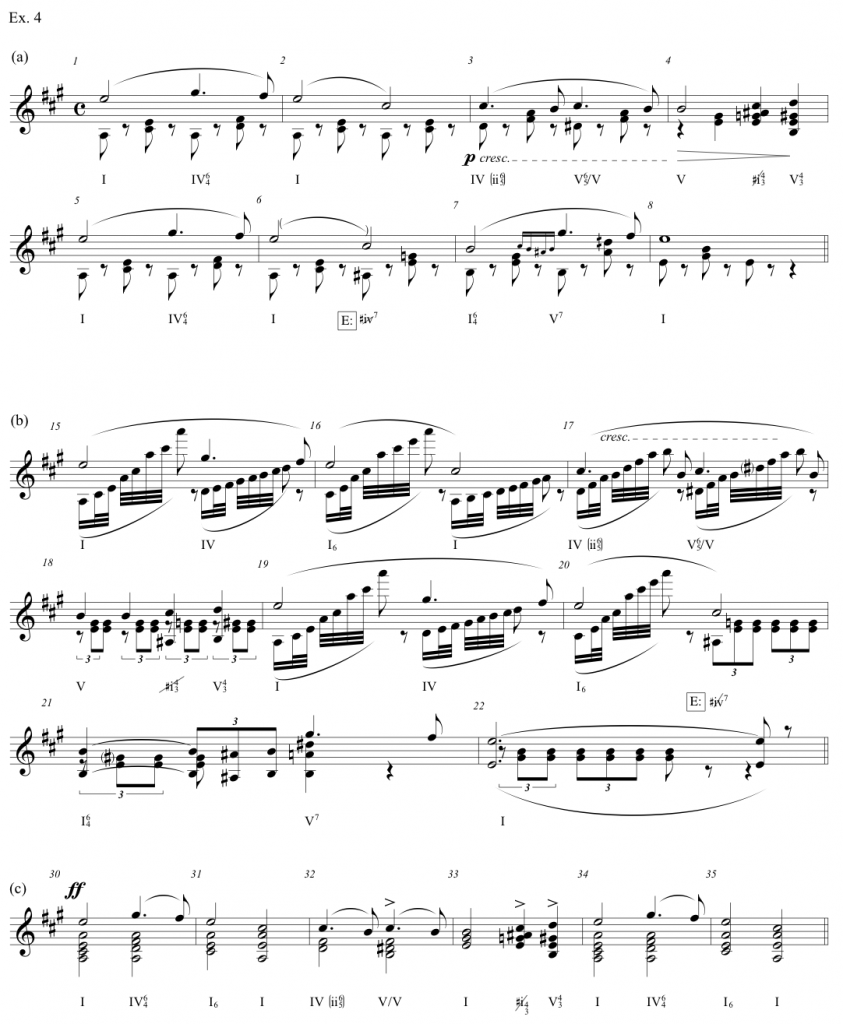 Clearly, though the relationships between original statements and their recollections in Nos. 1, 2, and 4 differ from one another in terms of both length and degree of “decoration,” there is one constant: each of the recollections remains faithful to the harmonic scheme of the original statement. (I consider the occasional alteration of a chord by inversion in No. 4 as remaining faithful.) Only No. 3 offers an exception.

But textual criticism (the process—more artful than scientific—of discovering and emending errors in a text, whether with the authority of concordant sources or through conjectural emendation based on “grammar” or style) is not the equivalent of 2 + 2 = 4. Is it possible, then, that measures 25 – 28 in No. 3 are not a mistake at all, but represent exactly what Blagrove intended? I can imagine Blagrove pointing to two events in No. 3 that might justify the presence of what I have called the “deadening” effect of V – I – V – I, both of which appear in the measures that immediately precede measures 9 – 12 and 25 – 28 (thus measures 8 and 24, respectively). Although the tonic D-major chord on the downbeat of measure 9 is preceded by a like chord on the third beat of measure 8, that chord lasts only one beat, is separated from the downbeat of measure 9 by a quarter-note rest, and is widely spaced (open position) with an almost “sweet,” bell-like f’’ sharp ringing out on top. Thus Blagrove might have reasoned that to begin measure 9 on still another D-major chord, this one tightly spaced (closed position) and with an a’ on top, did not produce too much of the same thing (that is, a D-major sonority). On the other hand, the D-major harmony in measure 24 fills the entire measure, has as its final sonority a single, rather emphatic, closure-producing, half-note d’, and offers no breathing room before the downbeat of measure 25 (though I cannot imagine a performer not pausing for dramatic effect after that low d’). Here, then, Blagrove might have thought that to have measure 25 begin with still another iteration of D major would have caused an overdose of “D-ness,” thus resulting in an even greater sense of stasis than that produced by the subsequent V – I – V – I progression.

In the end, though, Blagrove’s ghost fails to convince me. Given the stylistic evidence gleaned from Nos. 1, 2, and 4, I would hold that the V – I – V – I sequence in No. 3 is an error, though whether typographical on the part of the engraver or “compositional” on the part of Blagrove (in which case we might prefer to call it a “miscalculation” instead of an “error”) remains uncertain. And as often happens when confronted with a questionable reading, the performer will have to decide what to play for him or herself.

Codetta: I will close with a brief note about Lady Belhaven of Wishaw House, to whom, as noted above, Blagrove dedicated the Morceaux. The wife of Sir Robert Montgomery Hamilton, 8th Lord Belhaven and Stenton, Wishaw House, Lanark, Scotland, Lady Belhaven is cited in the Wheatstone ledgers on 15 July 1851, when she rented (“hired”) a Wheatstone concertina with the serial number 2587. That Blagrove dedicated the Morceaux to her likely points to her having been one of his students. Moreover, Lady Belhaven holds a footnote-like place (though a very short footnote it is!) in the history of music in the nineteenth century. When Chopin toured Scotland in October 1848, he spent an evening at Wishaw House, and mentioned both his stay there and his hostess in a letter that he wrote to a friend from Edinburgh on 30 October 1848. Lady Belhaven died on 8 September 1873. 5