Things have been pretty hot in Australia with the country’s worst drought, horrid bushfires and, now, flooding. Thankfully, the music helps us in the worst of times. [Editor’s note: As if the drought, fires and flooding weren’t enough, at press time they are now dealing with coronavirus, as are we all]. 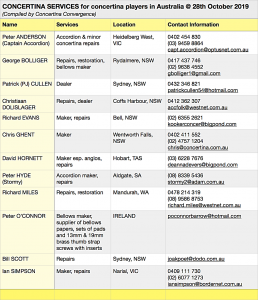 Concertina Maker in Focus: David Hornett. David is one of Australia’s concertina craftsmen and hails from the island of Tasmania. His handcrafted Anglo concertinas are definitely unique and include homemade reeds, all-Tasmanian wood and, no doubt a world first, kangaroo skin bellows. The instruments measure 5 7/8” across the bellows. He calls his instrument the ‘Tassey Tiger,’ in honour of the now extinct thylacine – the Tasmanian Tiger. The thylacine was one of the largest known carnivorous marsupials, and evolved about 4 million years ago. The last known live animal was captured in 1933 in Tasmania.

J. Stanley Concertina Maker. An “as rare as hen’s teeth” Stanley concertina surfaced late last year. Made in the 1880s by John Stanley (d. 1913), Bathurst, New South Wales, the Anglo German concertina was made using Lachenal reed pads. Stanley handcrafted the rest including intricate fretwork that carried his brand name and the purchaser’s name. This seems to be one of only three surviving Stanley concertinas. His instruments were advertised as being “designed to play loud for dance music.” For more information on Stanley see http://www.warrenfahey.com.au/concertina-doctor-of-bathurst/